Rye shows advantages in regard to climate change

In the year 2019 many farms have emphasised on diversity in order to fulfil agronomical challenges and public expectations. Therefore, the extremely versatile winter rye was able to regain considerable amounts of cultivation area. Fenja Luhmann, product manager hybrid rye explains that there are good reasons. 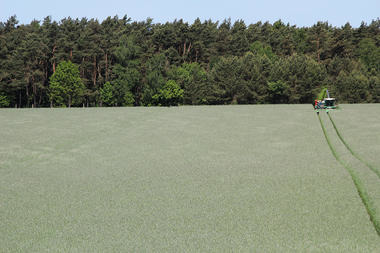 Harvest of rye wholecrop silage
In the year 2018 rye cultivation area increased by 25 % to 637,000 ha. In comparison with the year 2018 there will be another moderate increase in the year 2019 as especially on marginal sites winter wheat and winter barley were replaced by rye. This has various reasons: On one hand the county variety trials over the last two dry years have shown again that hybrid rye is in terms of yield stability and potential, superior to other cereals. Furthermore, no other cereal offers such a wide range of use: As wholecrop silage for feeding or as plant biomass for biogas plants, rye grain for bread making or for feeding pigs and beef.

Wholecrop rye silage has many advantages
Due to lower maize yields in 2018 cereal (especially hybrid wheat) was already used as wholecrop silage in order to COVER forage and substrate requirements. In the year 2019 some regions could again suffer from a supply shortfall. Thus, hybrid rye is not only helping to overcome a supply shortfall but it also breaks up maize crop rotations and improves yield security on marginal sites for maize. Additionally, workload peaks in forage maize production are reduced and the application timeframe for slurry and fermentation residues enlarged. 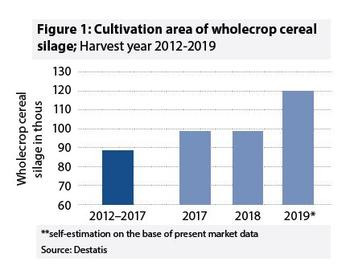 The main counties in Germany to produce wholecrop rye silage are Schleswig-Holstein, Mecklenburg-Western Pomerania and Saxony-Anhalt harvesting about 35 thous hectare at harvest 2019. Compared to previous years it would be an increase of about 20 %. Statutory testing 2019 of wholecrop rye silage shows a dry matter yield of about 15 t/ha, which is above the long-term average (Figure 2). 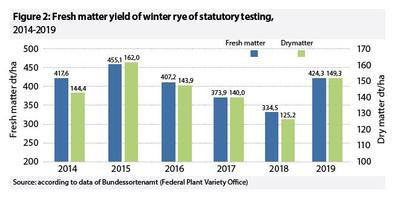 
Quality: Feedstuff samples are crucial!
The base for good quality is a good cultivation management in combination with an optimal sowing and harvest date. The analyse of more than 80 wholecrop cereal silage samples by LUFA Nord-West (an accredited service laboratory by the Chamber of Agriculture in Lower Saxony) showed that 2019 there were great variations in regard to DM content, starch content and fibre values. As the ENERGY content is significantly influenced by those criteria it also varied very much. Digestibility was analysed in Riswicker trials in which results were clearly above the theoretical values of the DLG (German Agriculture Society). The theoretical, often used, estimating equation would underestimate the ENERGY content. This shows once more that you should analyse your own silage in terms of feeding value and not rely on tabular data.

Rye or triticale?
Often if the topic wholecrop cereal silage comes up winter rye and triticale are mentioned in one breath. Both have their advantages but several reasons favour rye. Especially in regions with pastoral farms winter triticale had been a constant but in the years 2018 and 2019 winter rye was superior to triticale in regard to yield potential and stability; not only on lighter soils but also on rich loamy soils.

Long-term trials carried out by the University of Applied Science Kiel in cooperation with SAATEN-UNION compare e.g. dry matter performance of winter crops like wheat, triticale, rye and barley on different sites: Rendsburg in Schleswig-Holstein and Moosburg in Bavaria. Both sites are loamy sands and belong with an average rainfall between 814 mm (Moosburg) and 850 (Rendsburg) to the regions with the highest precipitation in Germany. However, Moosburg has between 60 to 80 soil points (German soil classification) and Rendsburg only about 45. Trial results reflect how much they are influenced by site and yearly conditions (Figure 3).

In the years 2015, 2018 and 2019 on both sites the weather conditions were subjected to an early summer drought. Even in Moosburg, a site where triticale has been dominating the yield performances for years, dry matter yield of rye was superior to triticale. Especially in the drought year 2018 rye showed an excellent drought tolerance.

Yield alone is not enough
It is also essential that the crop variety is healthy, especially if the importance of chemical pesticides is declining. While hybrid rye varieties have become healthier and got a better standing power, triticale has turned into an intensive crop. Due to an increasing occurrence of powdery mildew, yellow rust, brown rust and Fusarium high yielding triticale requires an increasingly higher amount of fungicides. Hybrid rye is the most efficient cereal crop by far. It achieves the highest yield when water and nutrient supply is limited. Due to a quick juvenile development and concurrent deep rooting rye has an about 10 % higher N uptake from organic fertiliser than triticale. Therefore, equivalent higher amounts of mineral fertiliser are taken up resulting in a clearly better nutrient balance. Additionally, even under adjusted fertilization rye can cope better with the difficult to calculate soil N mobilisation. Hybrid rye was bred for multipurpose usage ensuring high flexibility. Therefore, it is possible to decide short-term if the crop should be used as wholecrop silage or as grain rye.

Outlook
Current climate scenarios predict for Central Europe an increase in early summer droughts. Evidentially, under those conditions drought resistant rye convinces as wholecrop silage as well as grain rye. Latter was also shown by the 8 year grain analysis of hybrid rye, triticale, barley and continuous wheat in the state variety trials carried out by KWS Lochow. On average rye achieved a 5 % higher yield compared to triticale and up to 20 % compared to continuous wheat.

Rye will suffer comparatively less than other cereals under the climate change and consequently will become increasingly important.