Longer chaff and at the same time breakdown all the grains – the shredlage procedure promises more structure and digestibility, and therefore more milk. The basic principle is not a new one – there are farms that have already been experimenting with it since the 1990s. A field report from Lower Saxony. 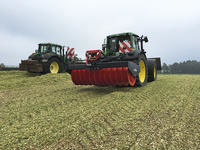 Image source: Ohrdes
The farm, operated by Bernd Ohrdes, his wife, daughter and an apprentice, is situated in Sulingen/Lower Saxony. Feed is produced for 160-170 dairy cows and their female offspring over approx. 160 hectares UAA. In addition to grassland, rye, maize, triticale and oilseed rape are farmed.

Already at the end of the 1990s, the farm had the idea of shredding maize more coarsely than usual to get more structure, while at the same time the cracking the grains at least as intensively. The technique used for shredlage, with counter rotating rollers on the one hand, and greater shredding length on the other hand, allows increased structure in the ration and at the same time considerable damage to the grains, so that the digestibility is improved. "The length of the shredded material has already been discussed among professionals for a long time. However, what has been ignored for a long time during this, also during official trials, is on the one hand, the damage to the grains and on the other hand, the selection of the shredding time", criticizes Ernst Kreiselmeier from Unternehmensberatung Rindvieh- und Schweinehalter Hunte-Weser e.V. "Too often, only the short and long shredding lengths were compared with each other in the trials. Much more important than the length of the shredded material is, however, that the grains must be broken as far as possible or if possible even ground down, to increase digestibility. Furthermore, the earlier shredding date of the shredlage plays a role in feed uptake and digestibility." 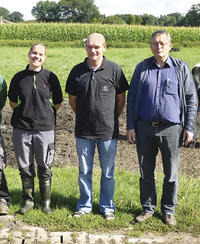 "We have experimented for some time with the shredding length. It was found that this length is a good compromise, which can be realised as an animal-oriented high-structured feed but is also good for ensilaging", explains Ohrdes. This statement is not made intuitively but based on measurements and analyses. "The thermal imaging camera shows that there is very even heat distribution in the shredlage silos. We have never discovered unwanted reheating or mould formation and there was no problem with seepage and the duration of compacting is also no different", sums up Kreiselmeier. With this, he is not only taking this farm into account, as meanwhile approx. 60 % of the members of his consultation circle use this process.

Also, one can better drive along the silo edges during ensilaging as the material sinks in less quickly, remarks farm manager Ohrdes.

The starch particles can be clearly seen on the ensilaging material.
No problem with earlier harvesting times

"Dead material is nothing for cows. Meaning, the less dead material is ensilaged, the tastier is the product. And at this early ensilaging time, the plants are considerably greener - nothing remains on the feed table. The possibility that there might be a little less starch in the grains is more than compensated by cracking the grains and thus improving digestibility of the contents," the farmer is certain. The earlier shredding time also is an advantage in terms of work economy, as at a later point it is possibly difficult to find a contractor, as in this region there is competition from the biogas plants. The experiences in the previous years were that "we must be finished before the biogas plants, because otherwise we run into trouble".

Important is the infeed speed, because if feed and cracking are too slow, the material accumulates quickly. Ohrdes speaks, from a contractor’s view ,of "practice-relevant drive speeds".

The fact that nearly all the grains are crushed leads to less selective feed uptake and also to considerably improved digestibility of the starch. "As most of the plant cells are literally "opened" and the grains are mashed, the entire cell water is released and is fully included in the acidification processes. This leads to a very stable liquid balance in the silo, more "rest" in the presented feed and more digestible starch", explains Kreiselmeyer. "You get more starch/cow/day without higher costs using this process. US studies even mention 500–1,000 g1. Then you achieve a higher performance from the basic feed, which also naturally influences the composition of the ration".

Everyone involved emphasises that in principle, it is extremely important to have several checks: At the shredder regarding the adjustment of the machine and the cutting quality, at the pile regarding compacting, and later regarding the monitoring of the silage contents.

How do the costs look then - is the shredlage process more expensive than normal shredding? At least in this region, here the costs are only marginally higher: Bernd Ohrdes is only charged up to 10 Euros/ha more for the shredlage. "The contractors in our region have left the prices for shredlage at the old level or only increased it by up to 20 Euros/ha. The reasoning was the low diesel usage for this process and the high customer retention through the process itself", explains Kreiselmeier.

So far the information has been about the technical and work related processes, but how about the end users – the cows – and finally about the milk end product?

The milk, stresses Ohrdes, is very rich, with a high protein and fat content. The goal of at least 4 % fat is nearly always achieved. The milk yield of the herd is approximately 9,600 litres with 4.16 % fat and 3.46 % protein. The animal health is very good; there are no problems with digestion and metabolism, and claw health does not present any problems either. "We are pretty well positioned in the national comparison with 3.0 lactations but there is space for more, we can still improve."