Check the N-management for legumes as well

The main topics of the new fertiliser ordinance are the tightening of the N-requirement calculations, the N-balance surplus and the blocking periods for fertilisation. What are the consequences for legumes? Can they be used in crop rotation for nitrogen fixation? 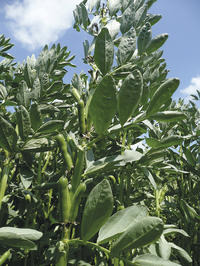 Grain legumes can fix 150 - 300 kg N/ha depending on variety and yield (see Tab. 1). This amount of nitrogen is produced from the air by the power of the plants without requiring fossil energy sources. Although this means that the grain legumes have a particularly positive energy and eco-balance, N-fertilisation by legumes is however classed in the farm nutrient balance as being identical to mineral fertilisation. This will not change either with the new fertilisation ordinance.

The future fertiliser ordinance from 2016 onwards only calculates in a reduction of 10 kg/ha equivalent to oil seed rape. It assumes here, that peas and broad beans only have a similar preceding crop value as winter rape, according to the most recent research. Background: the latest research of the University of Kiel and of the Chamber of Agriculture Schleswig-Holstein (funded by UFOP, Union for the Promotion of Oil and Protein Plants) demonstrated in 2012 to 2014 that a broad bean preceding crop provided comparable amounts of nitrogen for the follow-on crop winter wheat as did an oil seed rape preceding crop under the conditions of the test site in Schleswig-Holstein. (Fig. 1)

Still not enough nitrogen arrives at the follow-on crop 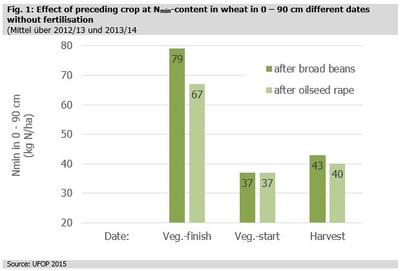 Broad beans and oil seed rape leave behind large amounts of nitrogen in the harvest residues (Fig. 1). The challenge in arable farming is to preserve these amounts of nutrients during the winter months in such a way that they can be utilised by the follow on culture(s) with as little loss as possible. Optimised crop rotation could improve the N-transfer into the follow-on crop and thus improve the preceding crop value of the legumes. Winter wheat profits from the preceding crop broad bean but this crop is unable to make the most of the N-pool in autumn with a nitrogen uptake of 20 kg N/ha in autumn. More like ideal catch crops are follow-on crops such as winter barley, oil seed rape or a cover crop with higher N-requirements.

To improve the N-efficiency in arable farming, in addition to N-reduced management, crop rotation management is also open to discussion. These kinds of questions are currently being researched in some crop research institutes with hands-on trial plots. In the next few years, the results yielded and experience in practice will bring some nationwide changes in crop rotation - we are looking forward to it!