What are the benefits of precision drilling of cereals?

After the establishment of the single seeding in cultures such as maize and sugar-beet, the focus has now turned to cereals. Here, the emphasis is on a practical solution with high field potential, the “precision drilling” varieties. First findings from practical field trials with wheat and rye make one sit up and take notice.

Horsch Pronto with precision drilling units; image source: Horsch
In hybrid cereals – rye, barley and wheat – the monetary value of the individual seed is higher, compared with conventional cereals. Thus, lower seeding densities are more economical and it is particularly important to have higher precision during placement and space distribution of the plants. Sugar beet, maize and oilseed rape place particularly high demands on single seeding.

For cereals, there is extensive technology necessary

This is not the case for cereals: Here extensive technology is necessary for single seeding due to the tight row spacing but cereals do not require the equally high precision demanded by the cultures mentioned above. As a result, precision drilling is here a compromise between the seeding processes. The singling unit is fitted onto the drop pipes of the Horsch Pronto standard driller and can be switched on or off using a bypass. Precision drilling of the seeds only takes place shortly before the seed share, when the unsorted seed stream is singled out using a dosing disc. This results in potentially lower sowing densities, more even distribution of the plants on a plot and with it an optimal crop management. Can single seeding of cereals be an alternative to the regular drilling? This question resulted in a joint trial by the companies Horsch Maschinen GmbH, HYBRO Saatzucht GmbH and Hanse Agro Beratung und Entwicklung GmbH.

The large scale trials took place on two plots close to the HYBRO breeding stations in Wulfsode. The company Horsch provided a Horsch Pronto with a 3 m working width. All the trial varieties were cultivated using identical and commonly used techniques.

Fractioning is necessary to warrant that the precision drilling dosage of the driller runs without problems. It is important that the grains are homogenous, allowing steady filling of the cell wheels in the dosing unit and therefore a uniform seed placement.

Varieties: The selected varieties for rye were SU Cossani and SU Performer, while for wheat the line variety Nordkap and the hybrid Hybery were chosen. 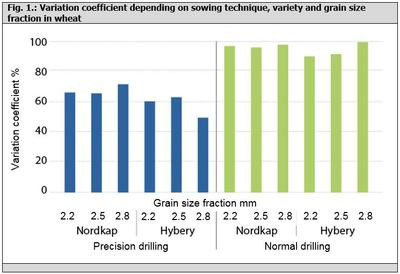 Fig. 1.: Variation coefficient depending on sowing technique, variety and grain size fraction in wheat
Parameters: Field emergence and plant numbers were determined at two dates in autumn, the plant dry matter and the shoot density at the end and beginning of the vegetation period, and the number of ear bearing shoots before harvest. Dry matter, determined in autumn and spring, is a measure for development of the plant culture. The number of spike bearing shoots documents the crop density and allows interpretation of the tillering factor. The variation coefficient (VK), describing the space distribution in the seed row, was determined in autumn using grading data. This VK reaches dimensions from 0-100, where a value of 0 means that all the plants are equidistant in a row. Compared to precision drilling, single grain seeding in sugar beets or maize regularly reached better values of about 100 %. The variation coefficient of 30-50 % aimed for in the literature could not be reached in the field with precision drilling of either wheat or rye. However, precision drilling demonstrates a clearly lower VK than normal drilling. This shows that the space distribution of the grains within the seed furrow is more even. The lower sowing density led in the hybrid wheat varieties to stronger development of the individual plants.